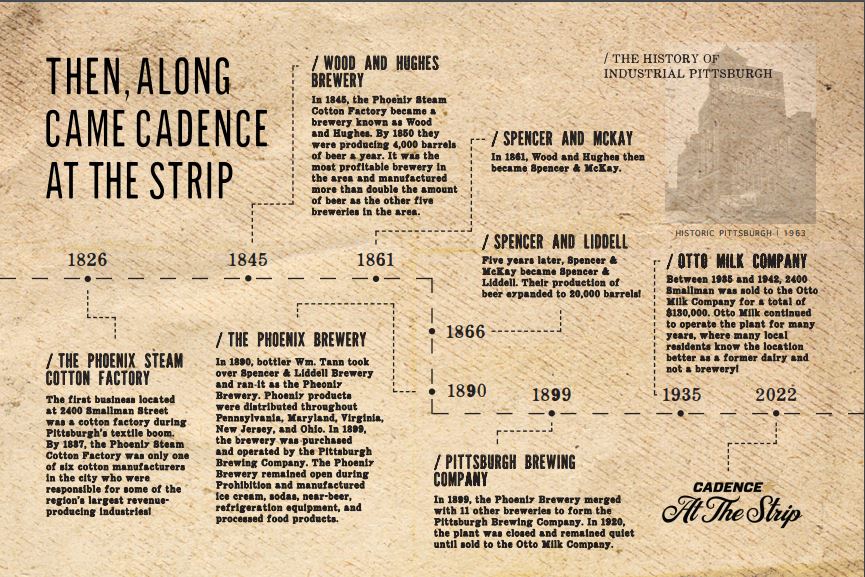 2400 Smallman Street is emblematic of the type of industry once housed in Pittsburgh’s Strip District. While the current building may date to the 1860s, the lot once housed industry of Pittsburgh’s growing markets. The first business on the lot was a cotton factory during Pittsburgh’s textile boom. It later became a brewery, which was rebuilt in 1865, and during Prohibition an iron and steel foundry, mirroring the varying industrial landscape of Pittsburgh itself. Otto Milk Company entered the building in 1928 and remained there until its closure in 1973. Since then, 2400 Smallman Street sits abandoned in a rapidly growing Pittsburgh neighborhood. As new businesses and housing take root in the Strip, like Otto Milk’s Condominium and Lofts right next door, 2400 Smallman remains as an example of Pittsburgh’s long industrial history and the ensuing deindustrialization of the late 1980s and 1990s. The building currently inhabits a liminal space between the old Strip District and the neighborhood of today. As such, its purpose as a Probike location provides numerous opportunities to reveal the rich history of industrialization and deindustrialization contained within its walls.

The 1826 directory lists the lot as housing the Phoenix Steam Cotton Factory, “which sat upon the ruins of the old factory run by J. Jelly. ”This is the footprint of the building we know today as 2400 Smallman Street. Smallman Street itself was constructed sometime between 1835 and 1855, when it appears on city maps. The construction of Smallman Street may have coincided with the 1837 annexation of the Northern Liberties into the City of Pittsburgh. At this time, the block was located at Smallman and Wilkins Streets. By 1837, the Phoenix Steam Cotton Factory was only one of six cotton manufacturers in the city who were responsible for some of the region’s largest revenue producing industries. Textile production actually out-earned the foundry and metalworking industry at this time. Yet July 1841 erupted in strikes and riots of the cotton factory workers in all of the manufacturers including the Phoenix Steam Cotton company. Perhaps this was one reason that within four years, in 1845, the company had closed.
The 1840s and 1850s in Pittsburgh were marked by exponential growths in industry and population, development of railroads and bridges, almost yearly floods, and outbreaks of cholera. Despite the challenges that came with rapid population growth, by the time of the Civil War, Pittsburgh was manufacturing iron and petroleum and exporting these products throughout the eastern United States. This outburst of industry also resulted in growing populations in Pittsburgh and its neighborhoods like the Strip District or Northern Liberties. The population had grown from around 12,500 in 1830 and almost doubled to over 21,000 in 1840. By 1845, when the first brewery opened on the lot of what is now 24th and Smallman, the population of the city had reached about 40,000. But 1845 also brought great destruction in April’s Great Fire of Pittsburgh, which destroyed most of the downtown area, several bridges, and many businesses and homes. Eventually, the fire proved to be beneficial for Pittsburgh industry, which almost immediately began to increase its yearly revenue.

Wood’s Brewery opened in 1845 on the site of the old Phoenix cotton factory, perhaps in the same building. It was the most profitable brewery in the area and manufactured more than double the amount of beer as the other five breweries in the area. The 1847 city directory lists the lot as housing the “Phenix Brewery” run by Mr. Wood, Hughes, and Harrison and located in the city’s fifth ward. Ten years later, in both the 1857 and 1858 directories, the lot is listed as located in the 9th Ward and run by “Wood’s Phoenix Steam Brewery.” Wood sold the brewery in 1859 to Joseph Spencer, an Englishman who had arrived in Pittsburgh in 1841. Spencer and his partners renamed the brewery “Spencer, McKay, and Company Phoenix Steam Brewing.” Between 1860 and 1889, the brewery changed names several times, alternately going by “Spencer, McKay and Company Brewsters and Maltsters,” “Phoenix Steam Brewing,” “Spencer, McKay, and Co. Phoenix Steam Brewery,” “Spencer and Liddell Brewsters” (1885-1889) and “Phoenix Brewery.” A fire in 1865 destroyed the building and led Spencer and his partners to claim insurance on it. When their claim was first denied, they took their case to court and were denied on the basis of “distilling and storing spirits without a license.” Thus, the brewery was forced to rebuild. The 1865 building could be the building located at 2400 Smallman Street today. 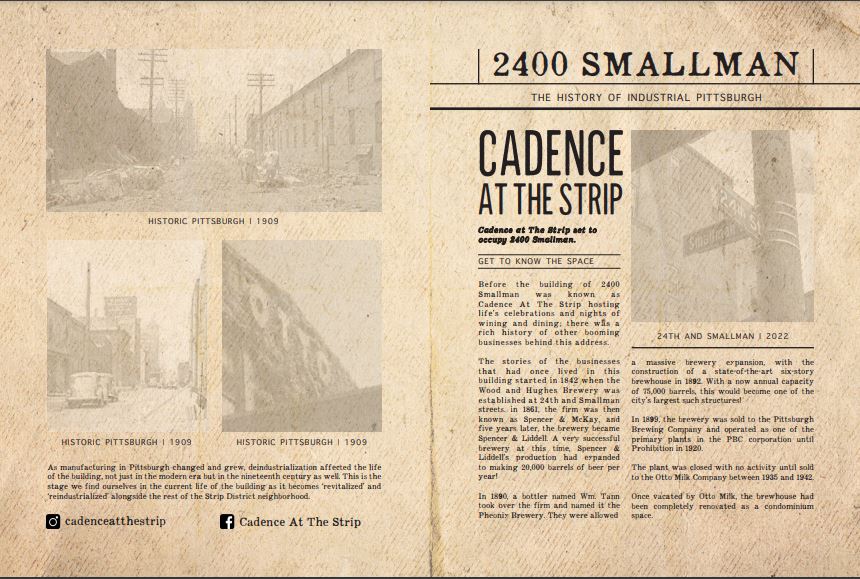 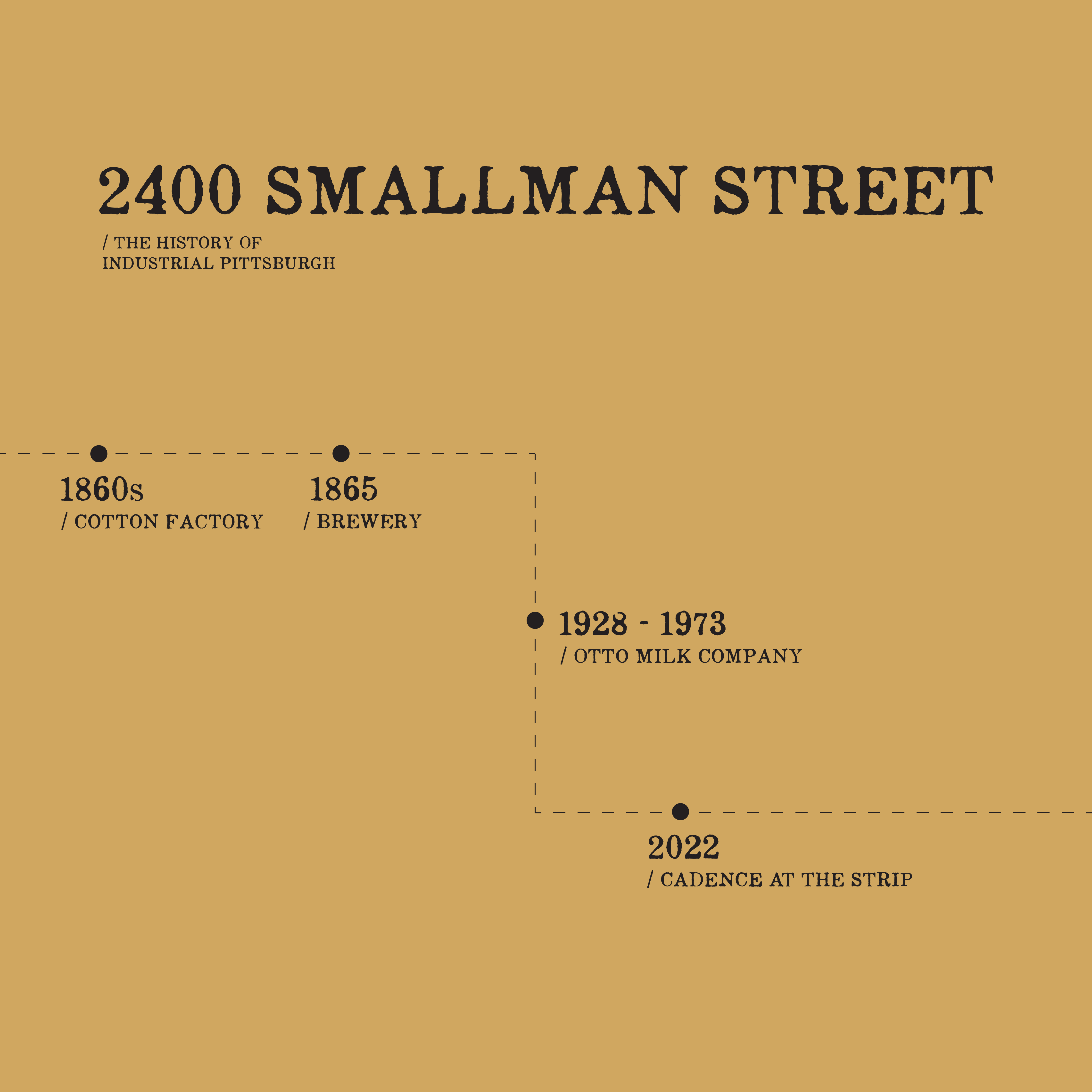 IN A HISTORIC BUILDING

Growing up, I used to hear stories about my grandma's work at the Otto Milk Factory. She was a secretary and was very proud of her work. My grandma wasn't allowed to go to college because she was a woman, but she very much valued her career. Never in my wildest dreams would I imagine I would be working on a project to restore the life and vibrance of this place that provided for my generations past. It has been an honor to work on this project with such historic and personal signficance. 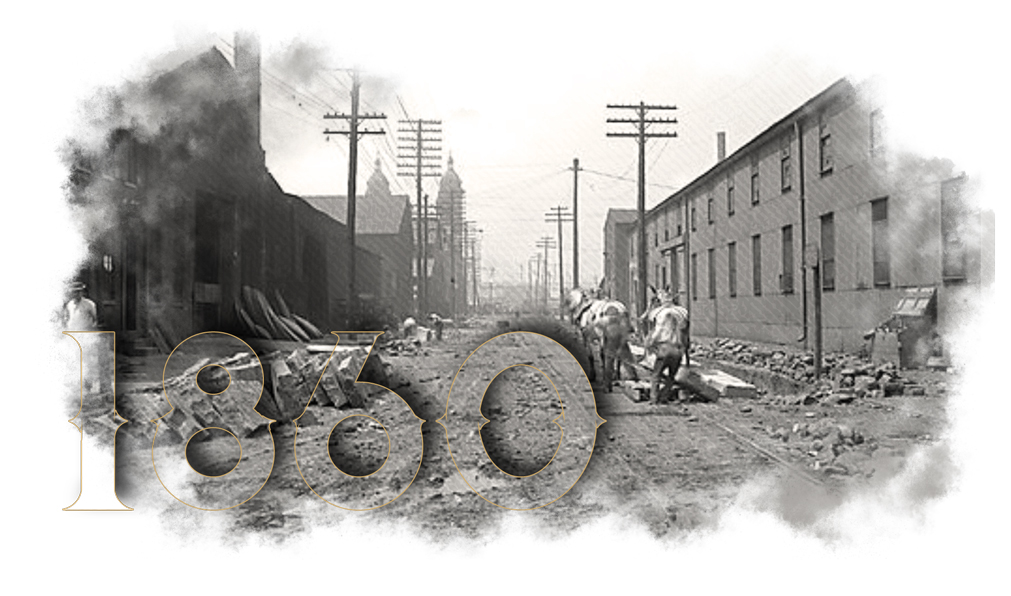